GUY Martin faces a 3 year jail sentence and £30,000 fine if convicted following a police investigation of dangerous driving after he boasted about speeding at over 180mph through a 40mph zone in his sports car.

The outspoken racer,  who has never won a TT, has admitted to breaking the speed limit through a small village on the Isle of Man in his review of the new Aston Martin Vanquish Carbon for Top Gear.

The 33-year-old wrote in the Sunday Times Driving section:

‘I saw 180mph down Sulby Straight, one of the fastest sections on the TT course, and the car wasn’t even in top gear, would Clarkson have the bottle for that? well would he? ’ 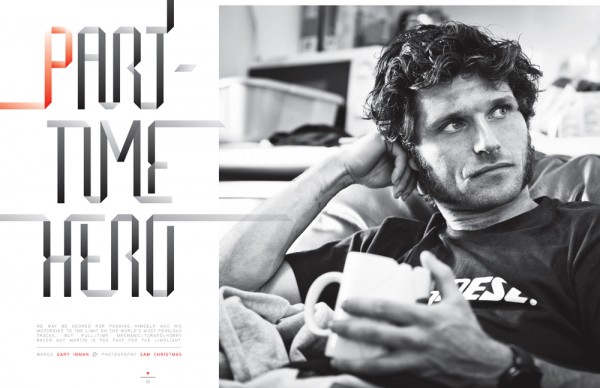 ‘About 17 miles into my lap there’s a corner called Ballacrye where I very nearly clipped a huddle of Children waiting at a zebra crossing outside the Orphaned kids center while getting the power down as the big ford engined V12 were fishtailing thru a sharp left out of Ballaugh village’.

‘It’s a neat corner that I had just to master but knew the cops would be all over it like a school boys violently itching nettle rash for the next few days, So for the Sunday morning after a few hash browns and cup of pg tips while all the old foggies were at mass begging the lord for forgiveness and all that lark,  I just went for it with the accelerator flat to the matt.

There’s a small jump right after that corner just before the #45 bollard and PC Hall were waiting there with the radar gun, I knew if I carried enough speed while covering my face with a copy of Cosmo magazine (see the price of vineyards in Spain? shocking, I could have got one for thrupence last year, now they’re 3million) well he would never see who were driving and I could maybe pin it on Bruce Anstey or Josh Brookes who were over testing aswell, and besides he wouldn’t be up to much in that old Ramsey panda edition Fiesta with the Aston bellowing out a cacophony of 700 fiery ponies at full chat.

We feck me if he didn’t catch up in the little 1.2l zetec Granny wagon coming into Churchtown past a hard right hander outside the Silly Moo’s chicken ranch, all the lights flashing, roaring and gesticulating with sirens blaring down into Parliament square, it were quite a Buzz I tell ya, but y’know what ; I’ll ‘ave ’em over the mountain section I thought while making my way past h***ds of elderly gentlemen who’d obviously all been shot and wounded in the war yet wanted my signature, Guy this, Guy that, yeah whatever man just buy my t-shirt and Snap-On tool chest if you want a piece of the real Guy Martin – and just then ; while clipping the apex and backing it into the hairpin at the start of the mountain mile – the FI light came on ’

The BBC confirmed yesterday this was not a publicity stunt for former TV presenter Jeremy Clarkson’s Top Gear slot following ‘an unprovoked physical attack’ on an Irish producer over some scrambled eggs, and that Guy Martin was not rehearsing to become the next Top Gear host but have not ruled out the possibility that he went over there to ‘ embellish his C.V ‘

Isle of Man P.C Inspector Derek Flint, said: ” We have detained Guy for questioning following a 2hr hold up on the Sulby straight and through the village of Kirk Michael as local residents were forced into dangerous overtaking maneuvers past Guy while being delayed for work”, causing consternation for the sleepy island’s inhabitants.