VALENTINO Rossi remains at the top of the Championship standings after round two in Austin, but by only one point.

Ducati’s Andrea Dovizioso is currently only one point behind Movistar Yamaha’s Rossi after taking second place at the Circuit of the America’s this weekend whilst his team-mate Andrea Iannone isn’t far behind with 27-points.

Marc Marquez is in third, but is now only 5-points behind Rossi after winning his first race of 2015, 9-points adrift of Iannone.

Brit Bradley Smith is in sixth with 18-points as is CWM LCR’s Cal Crutchlow. Both riders are 8-points off Movistar Yamaha’s Jorge Lorenzo who currently sits in fifth. 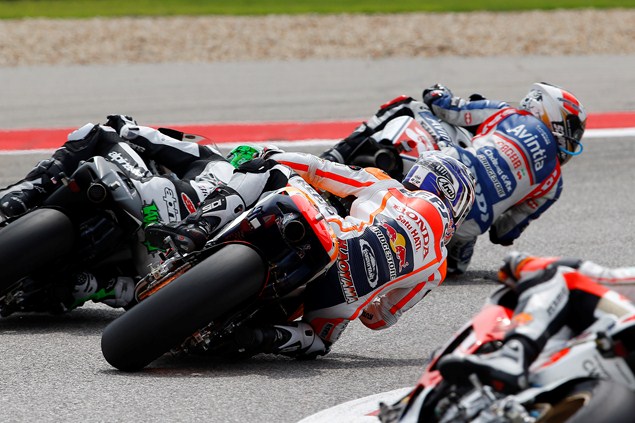 REPSOL Honda’s Marc Marquez has continued his winning streak at the Circuit of The America’s this weekend after crossing the line over two seconds ahead of the rest MotoGP field.

A slight delay to the race due to standing water under the bridge didn’t concern Marquez. Ducati’s Andrea Dovizioso led the field into turn one whilst Marquez trailed behind allowing the Ducati rider to open up a 0.5s lead during the opening couple of laps.

The reigning MotoGP World Champion waited until the fifth lap to pounce opening up a five second lead before taking the chequered flag at the exact same place his won his first MotoGP race in 2013. With Marquez up ahead, it left former team-mates Dovizioso and Valentino Rossi to battle it out as they almost collided through turn 12.

Rossi tried everything to hold off the Ducati of Dovizioso, but the GP15 clearly had more power along the 1.2km straight at the Circuit of The America’s and eventually Dovizioso claimed second as Rossi faded due to tyre issues.Rossi’s Movistar Yamaha team-mate Jorge Lorenzo left it late to make up ground, but did overtake the Ducati GP15 of Andrea Iannone with three laps to go to take fouth place.

Ecstar Suzuki’s Aleix Espargaro finished in 8th, 19 seconds ahad of his rookie team-mate Maverick Vinale son-board the GSX-RR. Both riders did however report on ‘being down on power’.

Scott Redding crashed on the very first lap after out-braking himself at turn 11 taking out Pol Espargaro in the process. 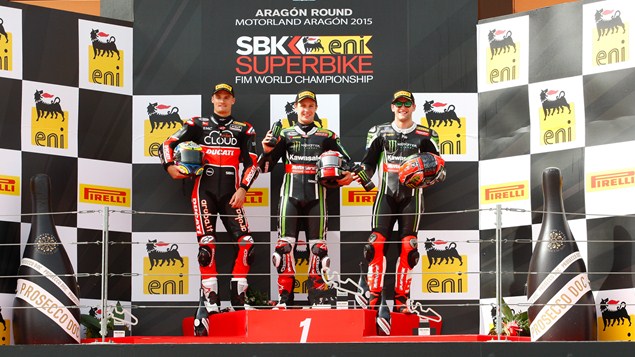 JONATHAN Rea now has a 26-point lead over Aprilia’s Leon Haslam after winning his fourth race of the season in Aragon and finishing second in race two.

Chaz Davies has climbed up the Championship standings after a second place in race one at Aragon and a victory in race two putting the Panigale R on the top step for the first time in the Superbike class.

Fellow British rider Tom Sykes is currently in fourth after a third place in race one despite crashing out of race two, but rookie Jordi Torres is only 3-points behind in fifth.

BRITISH rider Chaz Davies won race two in Aragon this weekend claiming Ducati’s first win in World Superbike since 2012 and the first ever for the Panigale R machine.

The second 18-lap race at MotorLand Aragon saw warmer conditions with Welshman Chaz Daives leading the way whilst race one winner Jonathan Rea battled through despite suffering from a fever.

Davies led from turn one and built up a comfortable lead to take his fifth career win by 3.1s as well as ending Ducati’s 58-race winning drought and the first ever win for the Panigale R in World Superbikes.

Aprilia Racing’s Leon Haslam looked more comfortable in race 2 as he battled with Rea at the front, but eventually having to settle for third place by only 0.5s as Rea took second.

Rookie Jordi Torres finished in fourth after a lonely race whilst Xavi Fores claimed another solid result on his debut weekend with the Aruba.it Ducati Superbike Team.

Kawasaki’s Tom Sykes was in the running for fourth, however the 29-year-old high-sided on lap five.

Reigning World Superbike Champion Sylvain Guintoli crashed out at the fast turn 14, but fortunately the Frenchman walked away unhurt.

Voltcom Crescent Suzuki’s Alex Lowes had another disaster of a race as the English rider ran off track in the early stages, but managed to recover to gain two-points finishing in 14th. 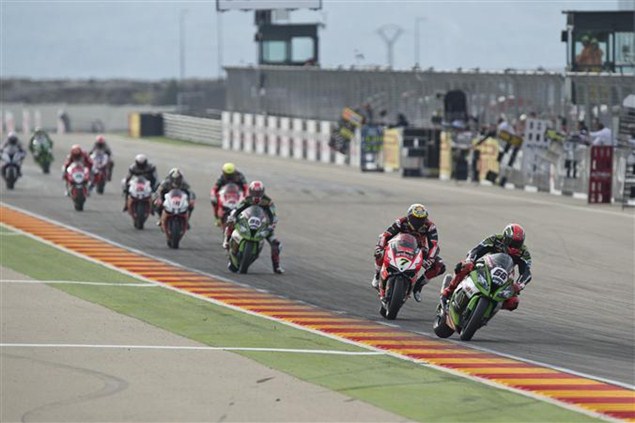 In the opening 18-lap race it was the two Kawasaki’s of Rea and Sykes who battled it out until the 2015 championship leader managed to break away slightly on lap 14.

The pace of Davies on the Aruba.it Racing Ducati increased in the closing stages opening up a slight chance of grabbing second from Sykes, the former World Champion, who eventually finished in third. Davies missed out on second by 0.051s after a last lap battle with Ulsterman Rea after he re-took the lead on the final corner.

Behind the leading trio, pole position man Leon Haslam finished ahead of his Aprilia Racing Team team0mate Jordi Torres and just ahead of Xavi Fores who finished in sixth.

Voltcom Crescent Suzuki’s Alex Lowes and Randy de Puniet both retired to the pits, however they re-joined at around half race distance to ensure technical issues did not crop up in Race 2.

So i went down the buying new farings on ebay route and they look pretty good on for the money but having war with the seller over two marks on a panel but thats a different story, the main thing is im hearing mixed reviews on the melting factor my standard ones dont seem to have much on them but the plastic feels heavier than the new ones, so to be safe what should i use to protect main side farings from melting?
Ive been looking at these on flea bay http://m.ebay.ie/itm/140882890845 http://m.ebay.ie/itm/281365838579?nav=WATCHING_ACTIVE

Anyone got something going for under €1,000?
lookin at vira-goes, and similar : /
cheap and cheerful to get me back on two wheels for the summer! :smileee:

I am just back from a long photorally trip and am going to the NW200 with the young lad next month. My missus will have a canary if I sneak off for another 3 day bike trip, so in the interest of marital harmony and DSI, if anyone is interested, I’d like to raise some money for DSI by selling the place I won for the revup4dsi 2015 today on Chopper’s raffle, ticket number 81. Whoever makes a payment of €200 by 19/04 to chopper’s charity page can take my place.

If not sold I’ll just have to rev up my self and wear my shoei in the house at all times.